Another Day, Another Knife Sharpener Review!

It’s been a very long time since I did a knife sharpener review, so I felt this was long overdue! Hope you’ve been well and keeping safe during these trying times. Self isolating for me has meant that I get to spend much more time in the kitchen, and therefore much more time with my knives!

If you’ve been following this blog, you’ll know I have nothing but mad love for Work Sharp knife sharpeners!

For those you don’t know, I own both the Work Sharp GSS as well as the Ken Onion sharpener. Both of them are fantastic products in their own right! In fact, my Ken Onion can sharpen just about anything from kitchen knives to scissors and pretty much everything else.

Why did Work Sharp introduce the E2 then? Is it meant to replace the Ken Onion and other products?

Nope not at all. The E2 is specifically designed to sharpen culinary knives, or kitchen knives. Most people wouldn’t be exactly comfortable pulling out their Ken Onion on a kitchen counter and then creating a pool of metal dust as a result of sharpening! That’s why the E2, it’s more “kitchen friendly” if you will! 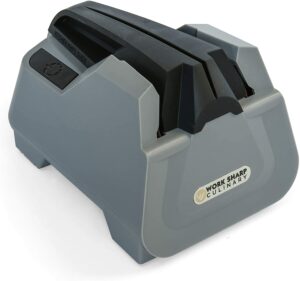 This is another difference between the E2 and the Ken Onion. The Ken Onion is not easy to operate and takes time to get used to. Of course when you do get used to it, it’s a joy!

Coming back to the E2, operation is a breeze right from the get-go!

There’s a left slot/guide and a right slot/guide. These guides are essentially where you would insert your knife to sharpen. You do one pass (or swipe) on the left side, followed by one on the right side. Rinse and repeat and away you go! 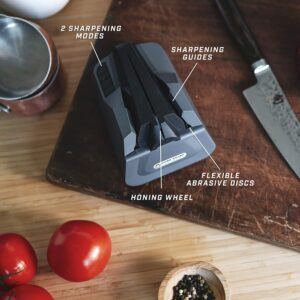 There’s also a honing wheel right down the center of the sharpener. What purpose does the honing wheel serve? Honing is simply realignment of a knife edge. All the top chefs know the importance of frequent honing, and so they develop a routine where every week (or 2 weeks) they make it a point to hone their knives so that the edge comes back into alignment.

Note: When sharpening your knives on the E2, be sure to always draw/pull from knife heel to tip. Do not push the knife against the disk, but instead always pull away until the last point of the knife is your tip.

#2 Versatile In Every Sense!

The E2 is pretty versatile in that it can sharpen more than your typical chef knife.

You’ll be surprised to know that it can work on scissors and shears, serrated knives, kitchen knives (for example paring and chef knives), and even pocket knives!

How would you sharpen a pair of scissors using this thing? Well it’s pretty simple. You pop off the removeable guide and just beneath it is a scissor guide which can be used to help sharpen scissors. 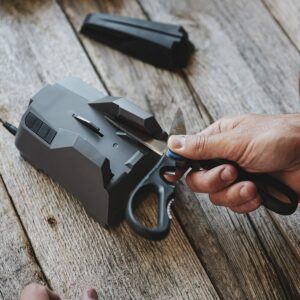 This is a moot point for an experienced sharpener. However, if you’re a rookie and don’t have much experience sharpening knives, then this becomes very important!

When I say the E2 is automatic, what I really mean is that it tells you once sharpening is complete! It essentially has timed grinding cycles that let you know when the sharpening process is done.

So why is this important? It’s important because not everyone is experienced enough to tell when a knife has been properly sharpened. It may feel sharp, but that could be misleading. Of course the best way to test for sharpness is still performing a good ol paper test.

Try slicing clean through a piece of paper, and gauge the sharpness of your edge. This is the best method to test for sharpness!

However, if you don’t have time for that, you can rely on the E2’s automatic programming and stop sharpening at that point. 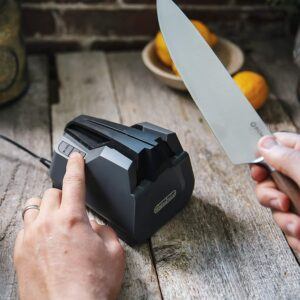 #4 It’s Not Overly Aggressive! (And Everything Has Been Determined For You!)

If you don’t know how to properly use the Ken Onion or the Work Sharp GSS, I can easily see how one could wreck a knife completely by stripping more steel than needed. With the E2, I think Work Sharp have in many ways removed the guess work when it comes to picking a grit or even a sharpening angle for that matter!

Everything on the E2 is determined for you beforehand!

Which is a good thing because it means there’s no messing around trying to figure stuff out! What’s also nice is that Work Sharp have designed the abrasive disks to not strip off crazy amounts of steel. It’s less aggressive than diamond for example, which if used in the wrong hands could strip of more material than required. 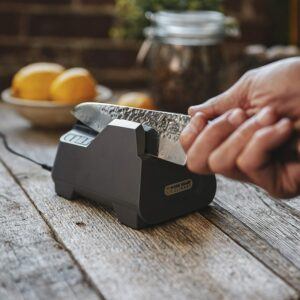 CLICK HERE TO CHECK OUT THE WORK SHARP E2 ON AMAZON!

Should You Buy The Work Sharp E2 Knife Sharpener?

There’s literally tons and tons of knife sharpeners in the market! Should you buy the E2? Well it really depends on what you’re doing. The E2 has been designed for the following audience:

Chefs, Homeowners, & Rookie Sharpeners—Not everyone has a passion to stroke a knife against a wet sharpening stone. For these people, the E2 is definitely a good option!
Those Who Prefer Electric!—If you’ve already decided that you would like an electric knife sharpener, then the E2 is something you will want to consider.
Those On A Tight Budget—Unlike many other electric knife sharpeners, the E2 is very reasonably priced. If you’re on a tight budget, the E2 might be ideal!

If you’re any of the above, the E2 is well worth considering. In terms of overall performance, usability, functionality, and even portability, the E2 gets 2 thumbs up from me!

CLICK HERE TO CHECK OUT THE WORK SHARP E2 ON AMAZON!

But what about the others? That is, someone who has some experience with knife sharpening. The E2 is a fantastic device, but it does have its limitations in what it can do.

Let me be very clear and say that you will not get the same results using the E2 as you would using a sharpening stone!

If you want sharpening stone type results, you need to invest in sharpening stones. The E2 won’t do this for you. As long as you understand this, you’ll save yourself from disappointment. All this being said, the E2 is still a phenomenal knife sharpener capable of restoring a blazing sharp cutting edge!

What Are The Differences Between The E2 & E2 Plus (AKA E2i)!

Work Sharp have 2 models of the E2:

E2—This is the entry model. It’s the cheaper of the 2.
E2 Plus—Same as E2 with a a few more enhancements.

The E2 plus is more expensive than the E2. Let’s look at how the 2 models differ: 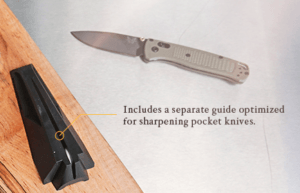 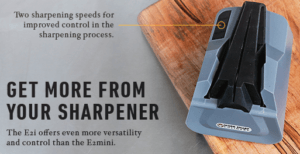 For completeness sake, I should mention the 3rd and final difference: price. As mentioned previously, the E2 is cheaper than the E2 plus. If you’d like to know exact pricing at this time, please check on Amazon by clicking the links below!

Are There Any Shortcomings To Know About?

I can’t think of anything specifically that comes to mind for the E2. All in all it’s easy to use and does what it’s supposed to. However…..

There are shortcomings with electric knife sharpeners in general and I think it’s important to still understand these.

The biggest shortcoming of course is you can’t control how much steel is stripped off, or at least not in the same way you could if you were to use a sharpening stone. That being said, you don’t get the same convenience and ease of sharpening using a stone as would an electric sharpener.

That’s all from me. I hope this review post was useful. If it was, please consider sharing this post! Last but not least if you have any questions, please do not hesitate to drop a comment down below. I will be more than happy to help out, and if I don’t know the answer I can definitely find out!