Welcome back to yet another review post. This is part 3 of the Work Sharp Culinary knife sharpener review series.

Previously we did a deep dive and looked at both the Work Sharp E2, E2 Plus as well as the M3 culinary knife sharpeners.

Today we will be looking at the more technologically advanced E4 series: a beautifully designed electric knife sharpener with 2 innovations that make it truly unique and different!

Who should buy the E4? Is it worth the $$$? If not, should I consider something else?

Don’t worry as we’ll be breaking down the answers to all of these questions and more later on in the post! For now, here’s a few very interesting features you need to know about the E4!

CHECK OUT THE WORK SHARP E4 ON AMAZON!

And this is game-changer! Why? Belts are way more better than discs when it comes to knife sharpening. For one, belts are more flexible than discs, and two they typically tend to last longer.

Based on my own experiences using the Ken Onion, I can tell you that it’s one of the best knife sharpeners I have used, hands down! I can’t confirm with 100% certainty, but based on the images, it does look like the E4 uses the exact same belts as the Ken Onion. If it does, that’s definitely an advantage! 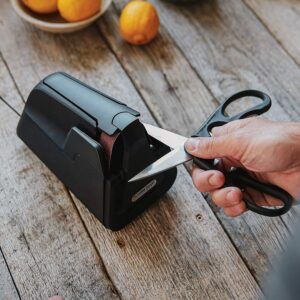 Another huge benefit with belts is that they can be easily replaced with belts of different grits. This wasn’t something you could easily achieve on the E2 and E2 Plus. In fact if you really wanted to, you can purchase an upgrade kit with an additional 5 more belts! 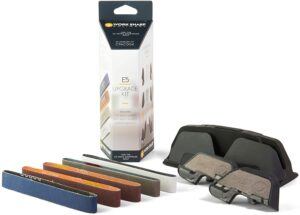 CHECK OUT THE WORK SHARP UPGRADE KIT ON AMAZON!

The E4 itself comes with 3 abrasive belts, all with the same P120 red coarse grit. It’s nice that there’s 3 of the exact same belt, but bad because you don’t get much flexibility.

In terms of coarseness, the P120 red is the coarsest grit. Then comes the P120 blue, the X30 grey, and the X4 white, which is the finest of all belts.

Which belt should you use? Well it really depends on what you’re trying to achieve and how dull your knife is. If you’re sharpening a knife that’s basically blunt, you need to opt for a coarser grit, maybe the P120 red or blue might be a good starting point. A couple passes on those, and then test for sharpness by trying to slice a sheet of paper.

You should see significant improvement, if not do a couple more passes. You can stop here, but if you want to get the sharpest possible knife, you need to polish and refine that edge. This can only be done with more finer grits such as the X30 grey and the X4 white!

Whether you own a non-electric pull through style sharpener, or an electric sharpener, or even sharpening stones for that matter, metal shavings/dust is always an issue!

I don’t think I need to tell you the dangers of ingesting metal shavings/dust. The worst part about this is that you might think you’ve gotten rid of all the metal shavings, only to realize you have some on your palms, fingers, and finger nails. Wiping down the counter might get rid of it, but then your cloth is ruined!

Coming back to the point, having a built in vacuum into the sharpener is a huge pro, bigger than most realise! 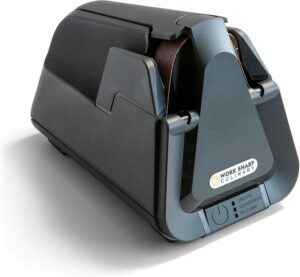 It’s a quick and simple way to keep your kitchen counters clean and safe for food prep.

The E4 is not just a knife sharpener. It can sharpen scissors as well. It’s also able to sharpen serrated knives, although I suggest being extra cautious if you’re attempting to sharpen serrations as those can be extra tricky!

Also, you can pop out the angle guides and as a result you gain a little more “real estate” if you need to sharpen other tools.

I haven’t tried this myself, but it does look possible. Keep in mind though, that now sharpening will be much more difficult because you don’t have angle guides to help guide your knife/tool.

I should say very easy to operate! It’s sharpening at the touch of a button! 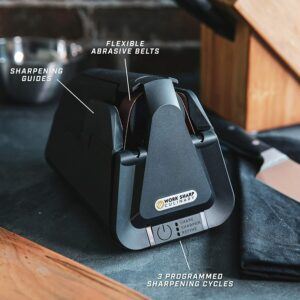 You turn on the device and you can select from a 3 step sharpening process:

All of the above 3 stages are timed and pre-programmed, so there’s no messing around with speeds or timing. You simply select whatever stage you desire and away you go!

If your knife is blunt as a stone, it’s best to go through all 3 cycles. If you’re looking for some quick touch-ups/refinements, best to go with stage 3. You get the gist!

Of course, sharpening using a stone is nowhere near as easy as using an electric knife sharpener!

CHECK OUT THE WORK SHARP E4 ON AMAZON!

Q1: What edge angle is the E4 set to sharpen? Is it possible to sharpen at different angles?

However, there is an upgrade kit offered by Work Sharp which has 15 and 20 degree angle guides. This does cost extra, but it might be a good investment if you’ve got knives of different styles and angles. 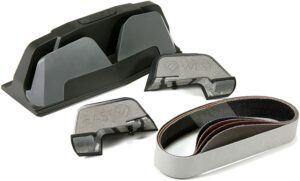 CHECK OUT THE WORK SHARP UPGRADE KIT ON AMAZON!
Go to top

Q2: How long do the belts last? How frequently will I need replacement belts?

This depends on how frequently you use them to sharpen knives. The more you use them, the more the abrasive on the belt will wear out. For your information, the abrasives on the belts mostly consist of ceramic (along with a few other material of course).

You can expect a belt to last you approximately 100 sharpenings before needing to be replaced. Of course, this is contingent on the blade steel as well (how hard/soft)!

Folks, if you want the belts to last a long time, take some extra time to care for them. Don’t carelessly toss them all crumpled in a dirty drawer piled on top of other stuff. Neatly place them so that they are free from any debris or anything that could attach to the ceramic abrasive. Just a housekeeping tip!

Q3: Does this system come with a honing station? And a leather strop belt?

No and no. A honing station would have definitely been nice, and a leather belt would have made for a complete sharpening solution. However, both of these items are not part of the design.

You will have to using a separate honing rod to hone, and a leather belt to strop.

Should You Buy The Work Sharp E4 Culinary Knife Sharpener Or The Less Expensive E2?

The less expensive E2 is a good sharpener, but its biggest shortcoming is that it comes with abrasive discs. As mentioned previously, belts are much more better at sharpening and also in terms of durability.

Because of this, the E4 is a better choice in my opinion.

For those on a budget however, the E2 is still an awesome choice for everything it can do.

And that’s a wrap! I hope you found this review post helpful. If you did, please consider sharing on the social platforms. Happy Halloween and we’ll see you in a couple weeks!